How to Enjoy the Beach (Pinoy Style)

Summer has started almost a month ago and I apologize for posting my first "summer blog post" halfway before the rainy season.

April's heat enticed almost everyone to head themselves to the beach and it is not a wonder if some of you hit Boracay and Palawan. For some who prefer to enjoy the local sun, especially those who are living in Mactan area, you always have the public beaches of Marigondon, Lapu-lapu City.

The shorelines of the place are nothing but political and a linear version of the social pyramid: Plantation Bay, Vaño Beach, Marigondon Beach. But you don't want to talk about that, you want some summer lovin'!

I've been living in Cebu all my life, in an Island called Mactan and here's what we do when we go out for some beach party.

Is a must. We're bringing the banquet to the native cottages and glimmering sand! What's a beach without sinugba, kinilaw, softdrinks, and liquor, anyway? 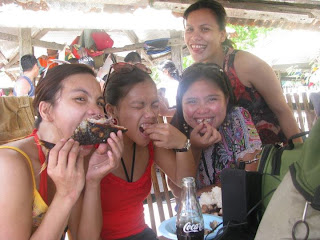 So there's what you call a goofy food capture. It's when you're caught between biting your food and smiling for the camera. Aren't we just cute? 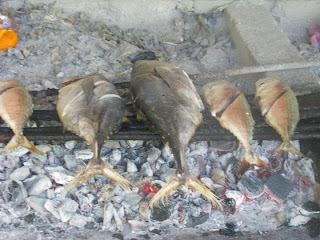 This is how a sinugba looks like for the average pinoys. No drama, just your good old rock salt, pepper for style, and well heated charcoal. It's highly carcinogenic (they say) to grill your meat under direct charcoal heat. Oh well.. this grill is great; so, whatever! 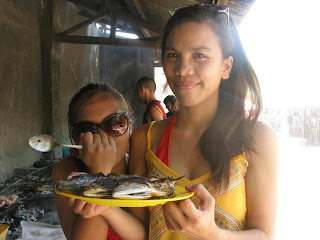 After everything, serve it with intense cuteness!

2. The Beach with the Gang.

Who goes to beach alone?  No one, but the brokenhearted. Fortunately, hearts melt in summer and not break. Hearts are malleable in the summer, they melt with your sweat. But who cares about a broken heart with this scene? 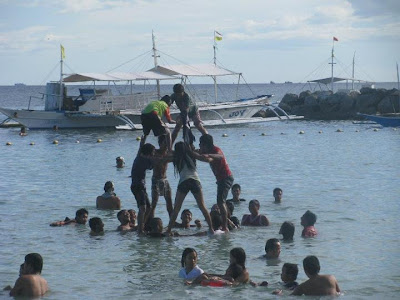 Don't act innocent. You know you did this before!

As much as I would like to list everything down, I have another summer getaway tomorrow. I'm heading to bed now, so, Ciao!